This project’s approach was twofold: facilitating use of Post-16 Phonics approaches generally across the service and specifically through instituting a phonics- based spelling club. The project fostered meaningful collaboration between tutors, volunteers, support staff and learners. 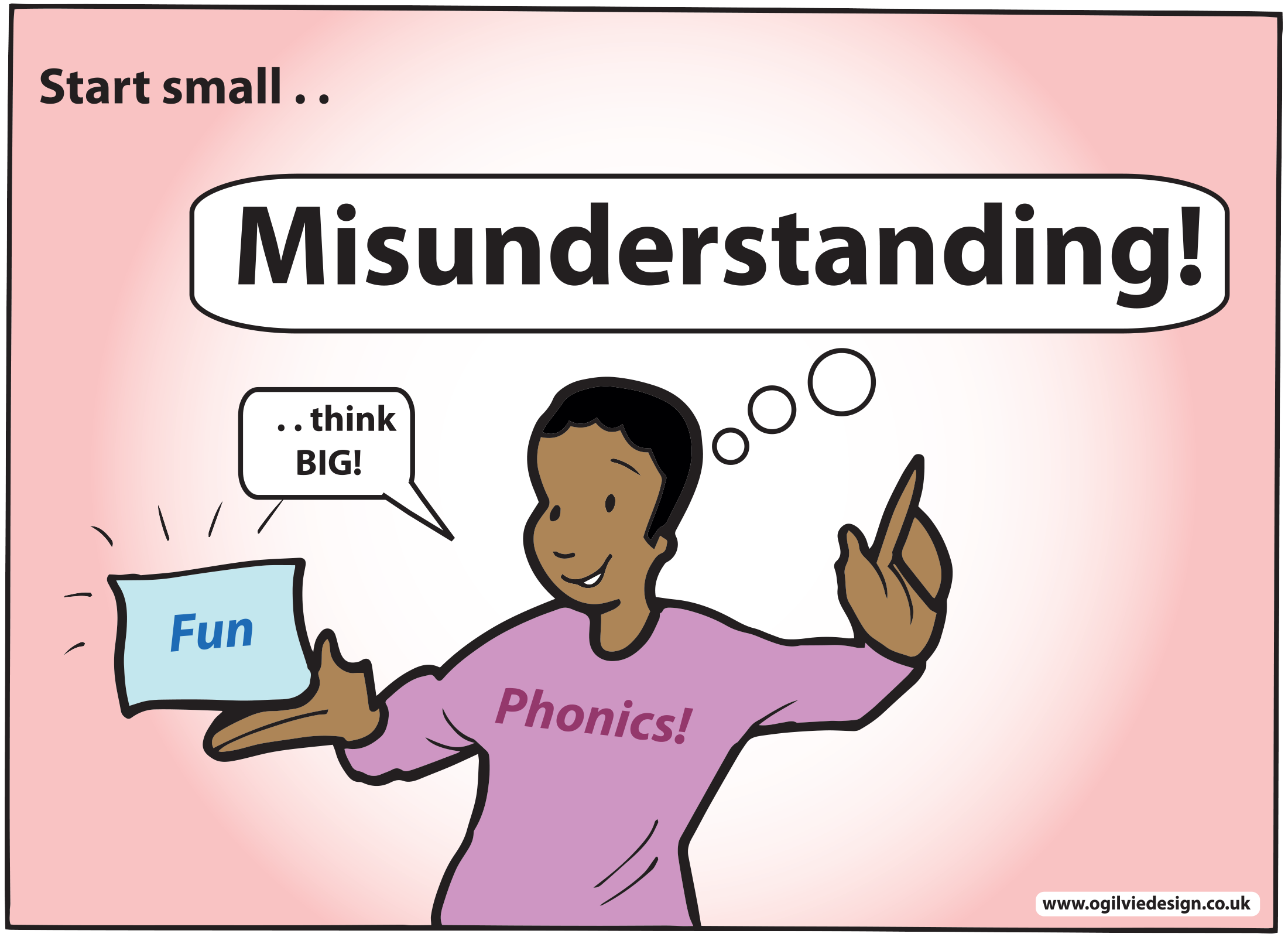 The reformed Functional Skills emphasis on underpinning skills led HALS to seek a whole-service approach to improvement that gave tutors new tools to support learner confidence through improved spelling and reading, identified as challenging for a large proportion of the learner cohort.

Analysis of initial assessments in the service identified spelling as an underdeveloped skill area. Learners reported that spelling issues held them back in career or study and contributed to feelings of low self-esteem and self-confidence.

A further identified need across the service was in reading both study texts and for pleasure. Learners and assessment staff reported challenges in decoding which affected both achievement and retention.

The service has a goal to improve how volunteers and frontline staff are used to support teaching, learning and assessment.

Training & Support for Staff and Volunteers
We delivered a series of CPD and support sessions for frontline staff and volunteers as well as tutors and curriculum leads. These included:
• Post-16 Phonics for spelling workshops delivered by our mentor for 28 staff and representatives from 4 other London Borough ACLS;
• project visits to classrooms;
• weekly cross curricular discussions, including learner support staff, supporting the rationale and aims of the project;
• staff-led training equipping colleagues with 5-minute Try Out activities.

Teaching
Two drop-in spelling clubs were delivered on Friday mornings. They were divided into Pre-Entry to Entry Level 1 literacy skills and a group with skills working at Entry Level 2 plus. Over the 8 focused weeks of the club, 20 learners attended and actively took part.

Learners were encouraged to explore how spelling had impacted on their lives and study, and to take a proactive role in understanding the phonics approach and evaluating the lesson activities in continuous feedback. As the lessons continued, tutor diary reflections describe how the initial ‘design’ was adapted, and a pattern developed, that involved starting sessions with a text, underlining and sorting activities focusing on key sounds and culminating with work on word stretching on mini whiteboards. Learners were also encouraged to explore the frequency of graphemes and reported that this helped reduce the stress of the spelling ‘mountain’. The use of personal whiteboards created a safe space shown by the more reluctant writers who very quickly moved to put ideas in writing.

Try-out activities
Tutors and support staff were given activities from the Post-16 Phonics toolkit or those adapted in the Spelling Club to trial in classes or in other learner support contexts. Activities were tried in 6 different classes across ESOL, ICT, English and maths.

This project encouraged regular reflection on the part of participants in the form of an email ‘diary’. The key participants used their reflections to feed back into the project proposal on a weekly basis and were empowered to make their own adjustments through evaluation and discussion.

Assumptions which were made in the initial framework of the project plan – for example that the phonics approach would be more valuable to Functional Skills classes than ESOL – were re-evaluated and adjusted. Some of the clearest evidence of success was drawn from the ESOL team both in terms of tutor feedback and engagement and learner progress. Learner referrals from ESOL increased in the first few weeks of the project as ESOL learners reported back to the classes the benefits of being in the club. These were limited to maintain a balance of ESOL and first language speakers in the club, and a separate ‘phonics for ESOL’ club was proposed along with specific training in phonics for ESOL. 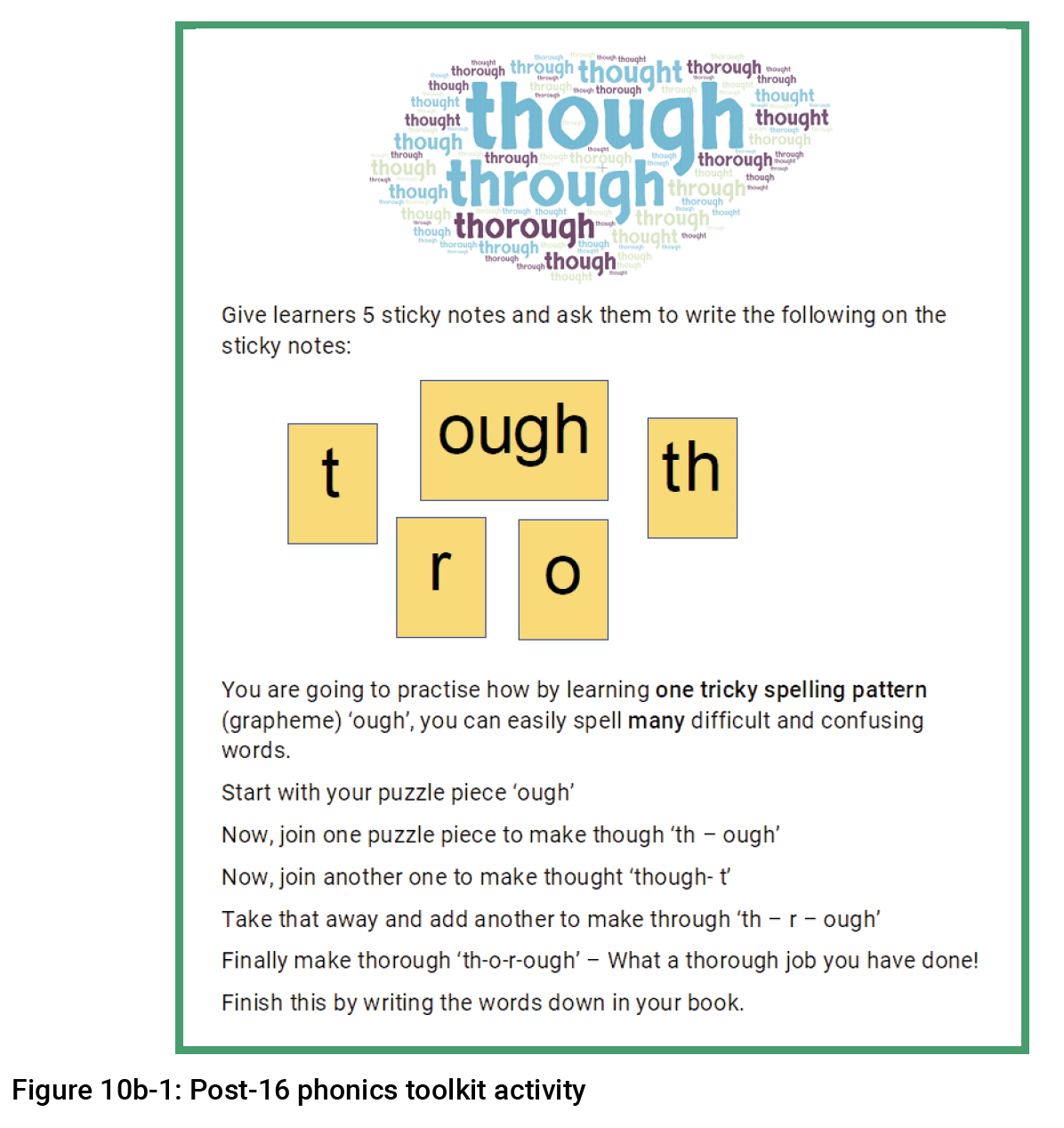 underpinning the activities base of the spelling club; however, learner responses to the piloted activities were used as guides to implement, adapt or reject activities as the club progressed and evolved. Activities from the toolkit recommended and trialled in the club have been embedded within Functional Skills Entry Level classes to support achievement.

Participation in CPD activities designed to give the project as wide a reach as possible was high. From the beginning of the project, a range of CPD sessions took place and resulted in a series of formal and informal professional discussions cascading into team meetings and, of course, beside the photocopier! CPD sessions on the project and the approach were opened out to colleagues from other London Boroughs and information and progress from the project was shared in network groups.

A CPD session co-presented by the volunteer lead included staff from all curriculum areas, support staff and curriculum managers. 5-minute ‘Try-out’ materials and activities were disseminated to all CPD participants to encourage whole service support for the project and to broaden understanding of the approach and raise interest and awareness across the service. Reflection and evaluation were encouraged particularly from non-specialists and those outside the main focus of project activity. Feedback from staff demonstrated an interest in learning more about the phonics-based approach and its impact on learners as well as their own understanding of spelling.

“I enjoyed delivering the task, but it will take time some for me to grow in confidence with teaching phonics.”

“Through research and practice, I am finding it easier to embed a phonic based approach in my classes. My initial fears have gone and now I am quite enthusiastic about finding ways to teach phonics to my learners and making the sessions fun and beneficial to them as well.”

“I combined the phonics activity with columns and tables in my ECDL class – it was easy and fun to embed.”

Three volunteers took key roles in this research in designing, trialling and evaluating the activities in the club and classroom, writing reflections of the project, supporting offshoots of the project (a weekly reading club), and co-delivering CPD. This has raised the profile of volunteers in the organisation and led to an award nomination for one volunteer.

The priority given to involvement of all service staff in CPD containing educational theory and practice was well received. Staff with key responsibilities for Learning Difficulties or Disabilities, marketing and team administration reported positively on their experience:

“it was great to be involved”

“it gives a new way of looking at supporting our learners to not feel like failures.”

Links and professional discussions between Functional Skills tutors and Pre/Entry Level 1 ESOL tutors and support staff around literacy issues have increased through sharing learners, tracking progress and email dialogue about the Spelling Club. Referrals from ESOL to literacy, whilst already in place at Level 1 and Level 2, have now started to develop at Pre-Entry level.

The paper-based initial assessment for literacy has been revised to make it more accessible for learners with Pre-Entry needs. Changes were influenced by feedback from spelling club members. One learner went from being emotional when faced with an enrolment form to ‘achieving’ an initial assessment and involvement in a discussion around his literacy strengths.

“I break down the word into sounds and that is helpful.”

“I feel these lessons are very good and would like them to continue.”

“That went so fast – can we have longer!”

Although retention on Functional Skills courses was a key aim, it soon became apparent that there would be further impact in creating access to literacy sessions for learners who otherwise would not have been able to access learning at HALS because of their Pre-Entry assessments. For these learners like R, a Jamaican-born male, the activity of moving from ‘cat’ and ‘bed’ to ‘mattress’, ‘battery’ and ‘bedroom’ in his first session was such an achievement that he took these words home on sticky notes to post around his shared flat.

Uptake from Functional Skills classes directly to the Spelling Club was low because of timetabling restraints; however, tutors reported that learner confidence in spelling has improved dramatically through the introduction of the phonics based ‘slot’ in lessons. Retention on Entry Level FS classes has increased from 74.25% in December 2018 to 94.7% in December 2019.

Most referrals were from ESOL classes, and tutor feedback reported progress in class to have increased rapidly in conjunction with attendance on the Spelling Club. Tutor comments included:

“S is demonstrating really rapid progress now in class. Her confidence has grown and she now reads longer words where previously she would hesitate or even stop”

“T really wants to continue with Spelling Club, even if it means she has to drop out of ESOL as she can’t juggle both. It is clearly meeting her needs far more than her original class.”

A key success of the Spelling Club was learner feedback on how the approach helped towards rapid, ‘adult’ achievements. Sessions ended with a plenary conversation with learners about ‘what we liked and what worked.’

Most of the learners arrived with very low self-confidence. For some, it was the first time they had attended a literacy session since childhood and for others it was as an alternative or alongside a course of study where negative experiences were still lingering. All learners had an initial conversation with a tutor during their first club session, which explored feelings towards literacy and specifically what role ‘spelling’ played in this.

Vocabulary chosen by learners indicated the extent and impact of the barriers with words like ‘scared’, ‘stressed’, ‘depressed’ being frequently linked to the word ‘spelling’. Although not all learners continued to attend, those who did gave positive feedback about the following contributory factors to their ongoing involvement:

• Moving rapidly in one session from a single sound or CVC (consonant, vowel, consonant) word to a range of relevant multisyllabic words e.g. fun to misunderstanding
• Use of concepts which recognised and valued learners’ prior knowledge such as the learners having a ‘database of sounds’
• A set routine of activities developed over the first weeks of the course enabled learners to feel confident about their own spelling and also empowered to support new learners and introduce them to the concepts as ‘knowledge experts’
• Small group size with one tutor and a volunteer meant that no-one was left to struggle or feel lost.
• Focusing on the phonics-based approach, rather than a series of rules, meant that key issues could be highlighted, addressed and then implemented within the rapid extension activities giving more ‘success points’.

Other points of learning observed by the project participants were that:

• Learners took to the sound-based approaches at different rates. As the majority of learners needed rapid improvement, this would affect being able to use this approach with a larger group.
• Session preparation was labour intensive because of the lack of available and relevant resources.
• The ‘Club’ approach where the project was on a separate day to most accredited courses was helpful in encouraging a safe and inclusive atmosphere but also limited the reach of the project.
• The profile of the volunteer on this project was raised and she was appreciated across the service as ‘non-specialist expert’.
• Professional discussions included and valued the input of non-teaching staff leading to an improved atmosphere of collaboration and pedagogical understanding across the service.
• Non-teaching staff began using newly acquired knowledge to support

Appendix 1 – Case Study of B