This project aimed to implement a Post-16 Phonics approach for a cohort of post-16 learners with Neuro diverse or LDD needs, by building a positive learning environment in order to increase appetite for spelling. A 5-week spelling challenge was devised focusing on improving mindset and appetite for spelling. 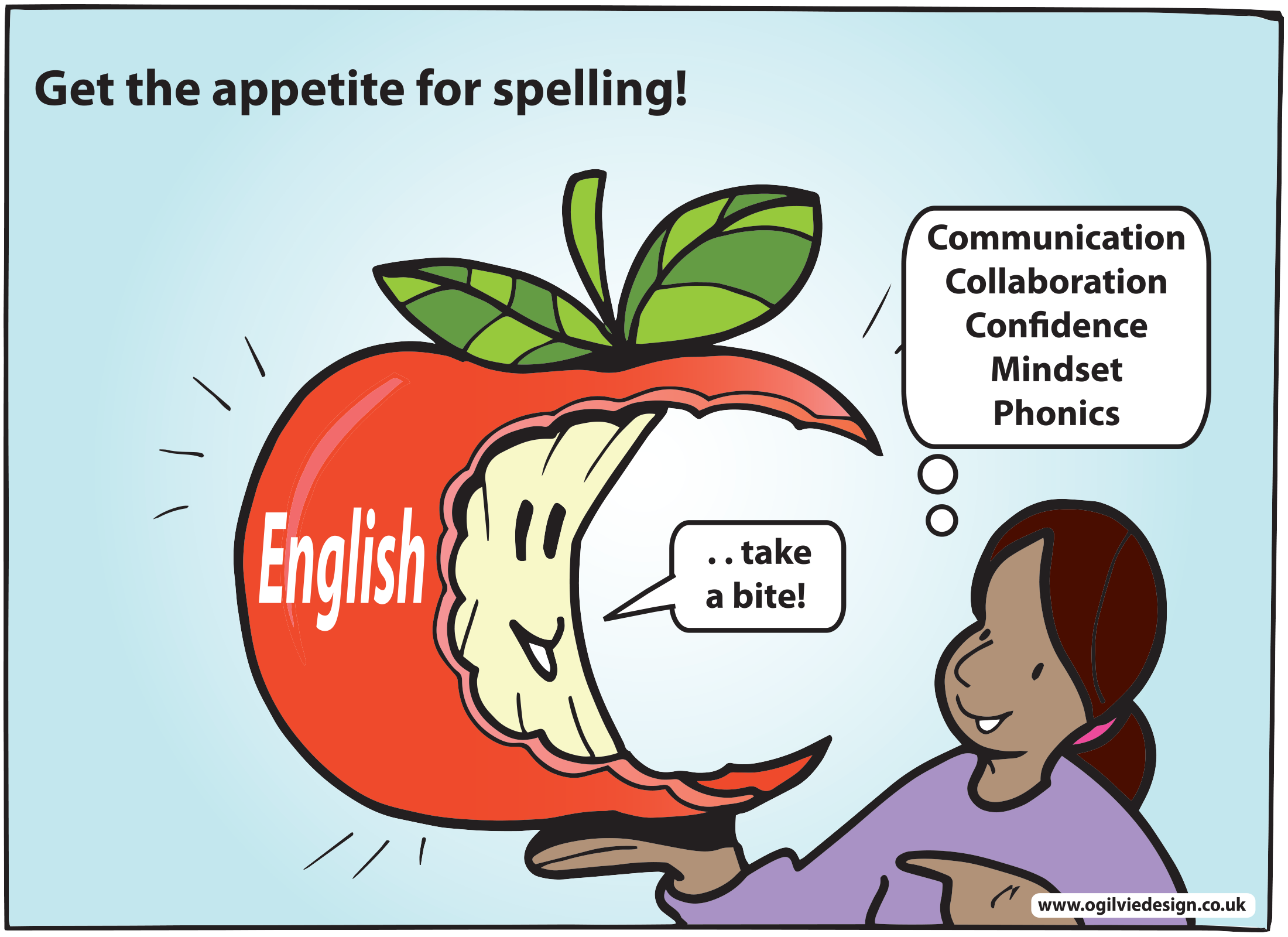 Myerscough College and University Centre is one of the leading land-based and sports-specialist institutions in the UK. It also has a flourishing Foundation Learning area with over 180 students with Neuro Diverse, Learning Difficulty or Disability (LDD) needs and Social, Emotional and Mental Health needs.

From an initial analysis and observation of the learners that would be involved, it was clear that there were gaps in phonics knowledge. It was decided therefore that the approach taken would need to include tasks that enabled the gaps to be visible and identified and the sessions to have sufficient flexibility to attempt to fill those gaps, ensuring a solid foundation for post-16+ activities to be trialled.

A 5-week spelling challenge was devised focusing on improving mindset and appetite for spelling with a potential aim to improve capability. Each session would use an initial task to help drive out gaps in phoneme/grapheme correspondences and enable knowledge build, if required before post-16+ tasks would be introduced. An initial data gather identified capability and mindset towards spelling, which was then re-taken at the end.

The key stakeholders in the project were Shelley Nicholson (Foundation Learning English teacher) and four support staff, who were supporting students in the classes included in the project cohort.

Post-16 Phonics was designed for older learners who come to spelling with knowledge of life and prior experience of language. However, learners with Neuro Diverse and LDD issues have not always had this prior knowledge and understanding or have gaps in their basic code as a result. These gaps can range from single letter phoneme knowledge and simple phoneme/grapheme correspondences to basic code plus and complex phoneme/grapheme correspondences. However, the emphasis needed to be based on the Post-16 Phonics premise that where possible, we focus on the learners’ oral knowledge and work with graphemes in the context of the whole word and not through isolated phonic sounds.

With this in mind, the project aimed to test the success of a Post-16 Phonics approach with neuro-diverse learners and identify the best way to take this forward for optimum learning and the potential for increased capability for this type of learner. This would include phonics knowledge-building activities when required, and post-16 activities identified from the Post-16 Phonics toolkit.

The project also looked at ways to promote a more positive mindset towards spelling and whether this would create a greater appetite and confidence in attempting to spell and thus aid and improve capability.

As the project focused on both developing capability and mindset it was important to set up a positive learning environment, where attempts to spell were praised and staff used positive language and reinforcement, encouraging students to do the same.

A total of four classes and 50 students took part.

Key assumptions about the approach included: 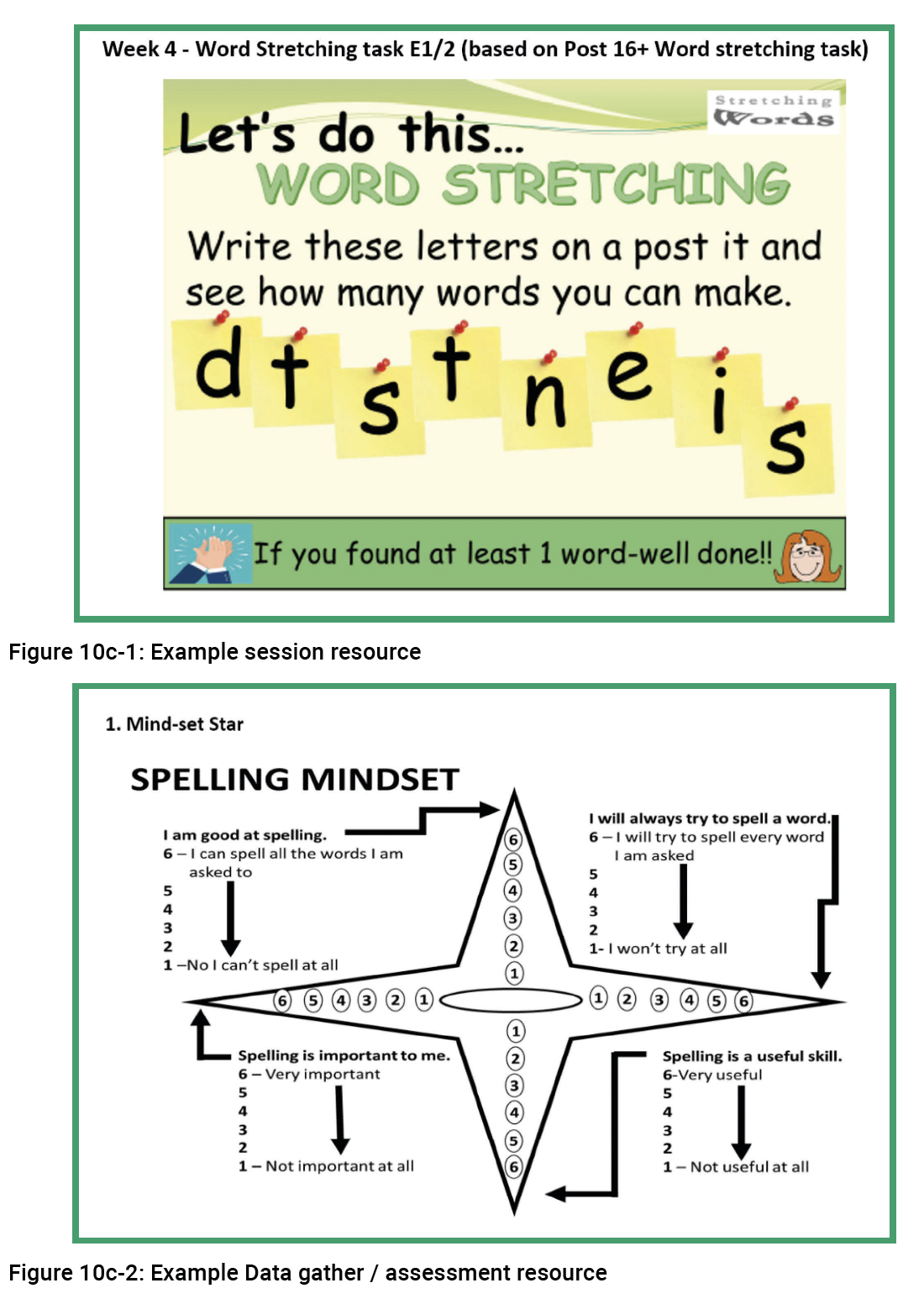 • Repetition of tasks/processes each week taking place to support both memory retention and ensure learners identified the link in the tasks they were doing, as it built on their prior learning week on week.
• Differentiated tasks would be available for differing learner levels and stretch and challenge.
• Learners would reflect each week and note down their thoughts and mindset in relation to the session and/or spelling.

The project approach was a five-week reflective learning programme that focused on spelling ability and the use of words in context, utilising Post-16 Phonics tasks.

Each week consisted of:
• Letter or digraph of the week
• An activity from the Post-16 Phonics toolkit (Figure 10c-1)
• Reflection on the lesson
In addition:
• Week 1included an initial data gather (capability and mindset) – see Figure 10c-2, whilst
• Week 5 included an end data capture (as above).

Professional values and attributes
The key professional learning outcome was the greater need for a flexible approach to phonics, ensuring learner need was met to ensure progression. This requires increased confidence from teacher and support staff to adapt their approach if current practice isn’t achieving the required outcome whilst maintaining the positive learning environment and an atmosphere where it is acceptable to make mistakes.

Professional knowledge and understanding
Working collaboratively with support colleagues emphasised the need for up-to-date knowledge and practice of the phonics arena and the appetite to share the knowledge in a 360-degree approach with the sharing knowledge with support and vice versa. Obtaining up-to-date phonics knowledge of both initial (Department of Education & Skills, 2007) and Post-16 Phonics approaches (UCL IoE and ccConsultancy for the Education & Training Foundation, 2019) ensured understanding of how phonics knowledge is built in the primary sector and how that differs from the Post-16 Phonics toolkit. The Project drew on these sources to help fill any learner gaps in phonics knowledge with appropriate practices for the cohort. Whilst the premise of teaching the words and not isolated graphemes was the preferred method, isolated phonic sounds had to be used to ensure understanding.

Professional skills
Developing the combination of a positive learning environment and a
reflective approach established an action research set. This was successful as thoughts and data gathered on a weekly basis from all sources (teacher/support/student) informed the following week’s plan and highlighted any adapted practices (teaching/learning/assessment) required.

The increased collaboration between teacher and support staff enabled a positive environment to be built that helped students to progress or improve their mindset towards spelling. The consistency of support allowed clearer relationships to be built and increased value in all staff views and purpose in sessions. Improved confidence about the role of support staff in the session had a positive impact on the attitude and appetite of the students.

As a result, the following key factors will be implemented:

Teacher perspective
The teacher perceived a large improvement in appetite towards spelling. The learners became keener, as the weeks progressed, to attempt to spell words. They actively prepared to participate by asking what the letter of the week was, or for wipe-boards and pens, so they were ready. Learners who initially refused to try became more readily involved and started writing words on the wipe-boards. This was because of the positive learning environment and attitude of all staff involved, as the emphasis was on trying rather than spelling a word correctly first time. Also, repetition of spelling practice improved students’ confidence and aided retention though required flexibility of approach and phonics knowledge, from staff, to ensure understanding. So improved spelling, however minimal, was a by-product.

Support staff perspective
All four support staff who were involved supported the teacher view and noted observation of an improvement of the students’ confidence, mindset and appetite towards spelling.
In addition, support staff felt that they were able to allow these students more independence to complete the work themselves as the weeks progressed, as prior knowledge was being retained and used.

Student perspective
Overall reflective feedback from students who participated was very positive and all responded that they felt more confident about trying to spell. For a closer inspection of improvement three students were selected as case studies.

Findings
Findings showed that students with prior knowledge of basic phonics were better able to take on board Post-16 Phonics and progress. The project identified those with gaps in basic phonics code and allowed practices and approaches to be amended to allow all students to have the option for progression.

In addition, using a reflective approach encompassing all involved (students, support staff, teacher) enabled a greater buy-in from all parties as it increased value in the learning environment and an improved mindset towards spelling.