This project has focused on how tutors used formative assessment strategies to support English learners in both the Study and Adult programmes, following their journeys and tracking their progression. 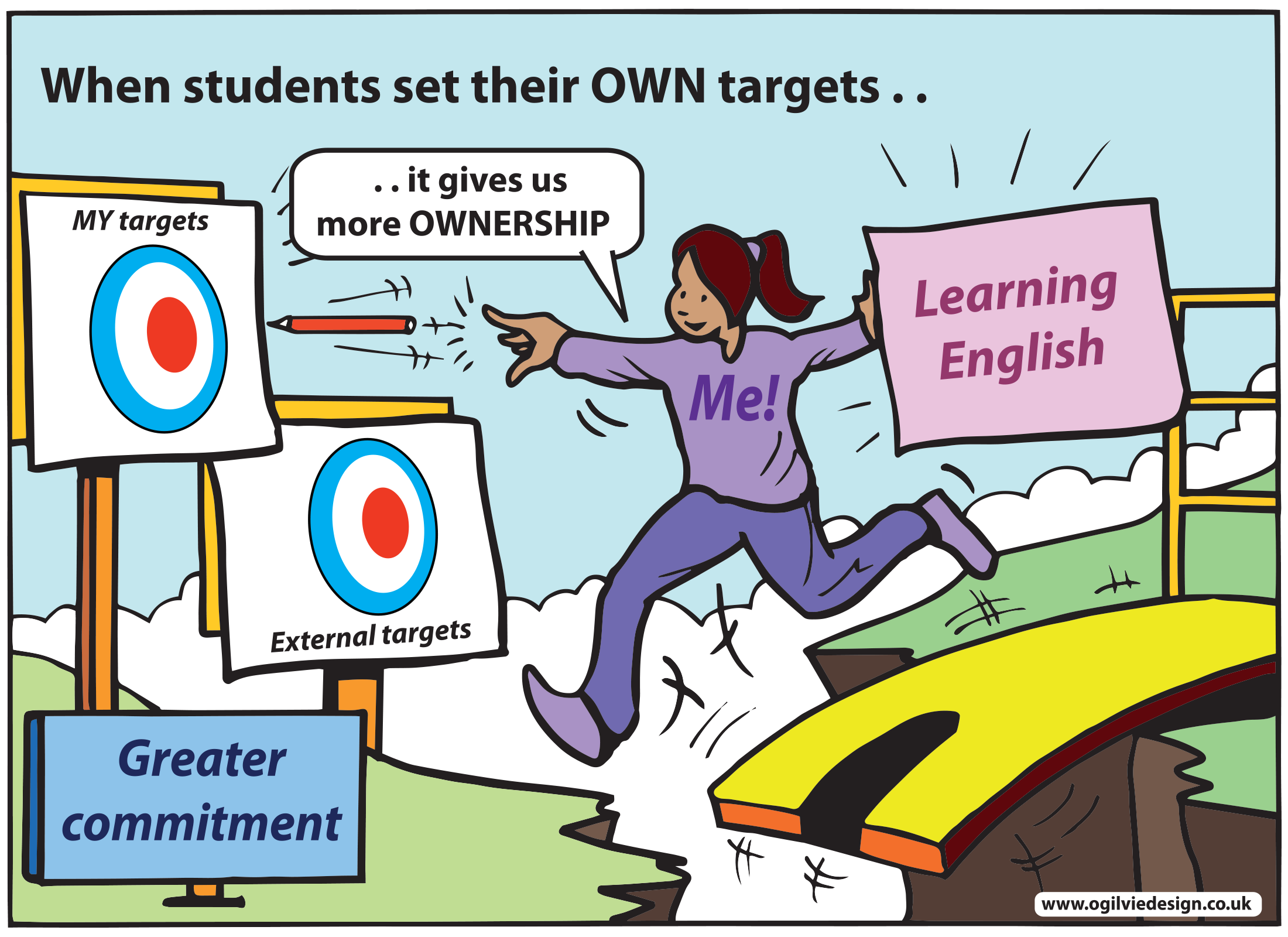 We are a regional training provider delivering vocational qualifications alongside maths and English Functional Skills and GCSEs. We needed better information about how learners were progressing and how well they were achieving. We also needed to support learners through the self-assessment process, where they were encouraged to identify specific areas of weakness based on their progress in a lesson.

The Basic Skills team has worked with the help of vocational tutors where possible. All research has been carried out with the added aim of linking lessons to topical content addressing equality and diversity.

We wanted the learners to take greater ownership of their own progression and unlock their ability to reflect on what went well and how they could get even better.

Alongside this, we wanted the learners to see the links between their vocational qualifications and maths and English as we believed this would improve their achievement in both areas and make basic skills – sometimes seen to be unnecessary to hard-to-reach learners – more achievable and enjoyable. We also set out to demonstrate to learners that these skills would help them in everyday life, and it was hoped that learners would be more motivated to retain a place on the programme.

Two maths and English tutors decided to trial new approaches with their groups. The intention was to begin at the start of the learners’ journeys and reassess them when the project was finished. As we offer roll-on, roll-off programmes, we expected learners to be at varying stages in the process.

Tutors initially began implementing a WWW (what went well) and EBI (even better if) self and peer assessment at the end of lessons. This was to encourage the learners to reflect on their own progress after a taught session. Tutors reflected on their teaching practice and we regularly discussed how our lessons unfolded; providing and listening to advice from our peers where possible.

Some of the approaches were:
• Addressing controversial topical issues such as homelessness and poverty and making a biased statement (GCSE English)
• Providing learners with dedicated criteria for marking their own work dependent on the task (GCSE English)
• Using a target sheet at the beginning of the lesson with a main aim and space to write their own individual aims (adult probation).

By choosing to follow the above ideas, it was hoped learners would:
• Become more confident in voicing their own opinion and increase their personal development
• Think about wider social issues, listen to arguments they would not normally consider, and improve their social development
• Improve their study skills through applying specific marking criteria which address the needs of the question and thus evaluate their performance and identify their areas for improvement.

At the end of the project, we were satisfied that achievement had been made in these areas.

From the discussions that took place between the Basic Skills team, it is clear that teaching, learning and assessment practices have been changed for the better.

In one class, following the GCSE English exams, the emphasis on exam-style questions was replaced by a learner-led, research debate-focused sessions which the learners appeared to enjoy. The effects of this inquiry approach can be seen in the learners’ workbooks – all previous exam-style questions are replaced with learners’ research carried out independently or in pairs and there is significantly less rote writing, as it has now been replaced with debates.

Teaching questions were addressed to learners which required a more detailed response. In discussions, tutors focused on the question “why”, prompting the response “because” from the learners, which opened up opportunities for them to give reasons in their verbal communication (and, hopefully in time, in their written work). Tutors have commented how the learners are very aware of this added emphasis on explaining their reasoning and are becoming more familiar with explaining with and without prompts from the tutor. In class, tutors comment that the difference is also noticeable in overall contributions to the session.

Learners who were previously very shy have become increasingly more confident in their abilities to contribute their opinions and take part in the lessons. Tutors are putting additional focus on the ability to justify word choices, phrases and other features of English. It was evident that the quality of the writing improved for tasks which required research and learners used facts and statistics more frequently in their own written work in order to be more persuasive.

Andrea noticed it can be easier to begin a lesson when learners are encouraged to set their own aims and objectives. Since setting their own targets, the adult probation English class have been able to achieve their aims more comprehensively with no evident negative effects to their learning. The tutor noted increased motivation reinforced by prior success when learners took ownership of their own progression. Andrea’s class chose their own aims, decided which work to attempt and marked each other’s work according to specific criteria to improve their own understanding of the subject.

It was occasionally quite difficult to prepare a lesson for such a potentially large number of varying aims, but it was worth the initial effort. Learners who could make choices displayed much more enthusiasm. It was noticeable that when learners were not given a choice, the reluctance to attempt the work was more apparent. However, in a following lesson, the same work could be among a number of tasks from which the learner would choose. When making their own selection, the learners became committed.

There has been increased communication between the vocational and English tutors through email, face-to-face contact and over the phone. In meetings of all staff, vocational tutors have been quick to praise the initial success they had making use of them and have highlighted instances of how this collaboration was successfully implemented.

Since the beginning of the project, collaboration between the two teams has also resulted in an increase in the bank of resources to enhance vocational tutors’ sessions (Figure 11b-1). Tutors also worked in collaborative team-teach sessions to improve the learners’ understanding of topical issues such as homelessness, poverty and the idea of supporting charities. Tutors from vocational subjects commented on how they could take ideas and resources from these lessons and apply them to their own subjects confident in the knowledge it will aid the learners’ understanding of their own subject.

Throughout the entirety of the project, two learners were observed closely to monitor their progress. AB was preparing to sit the GCSE English exam for the fifth time and had been with Springboard for two years. She had additional one-to-one support in the past but still struggled to pass. 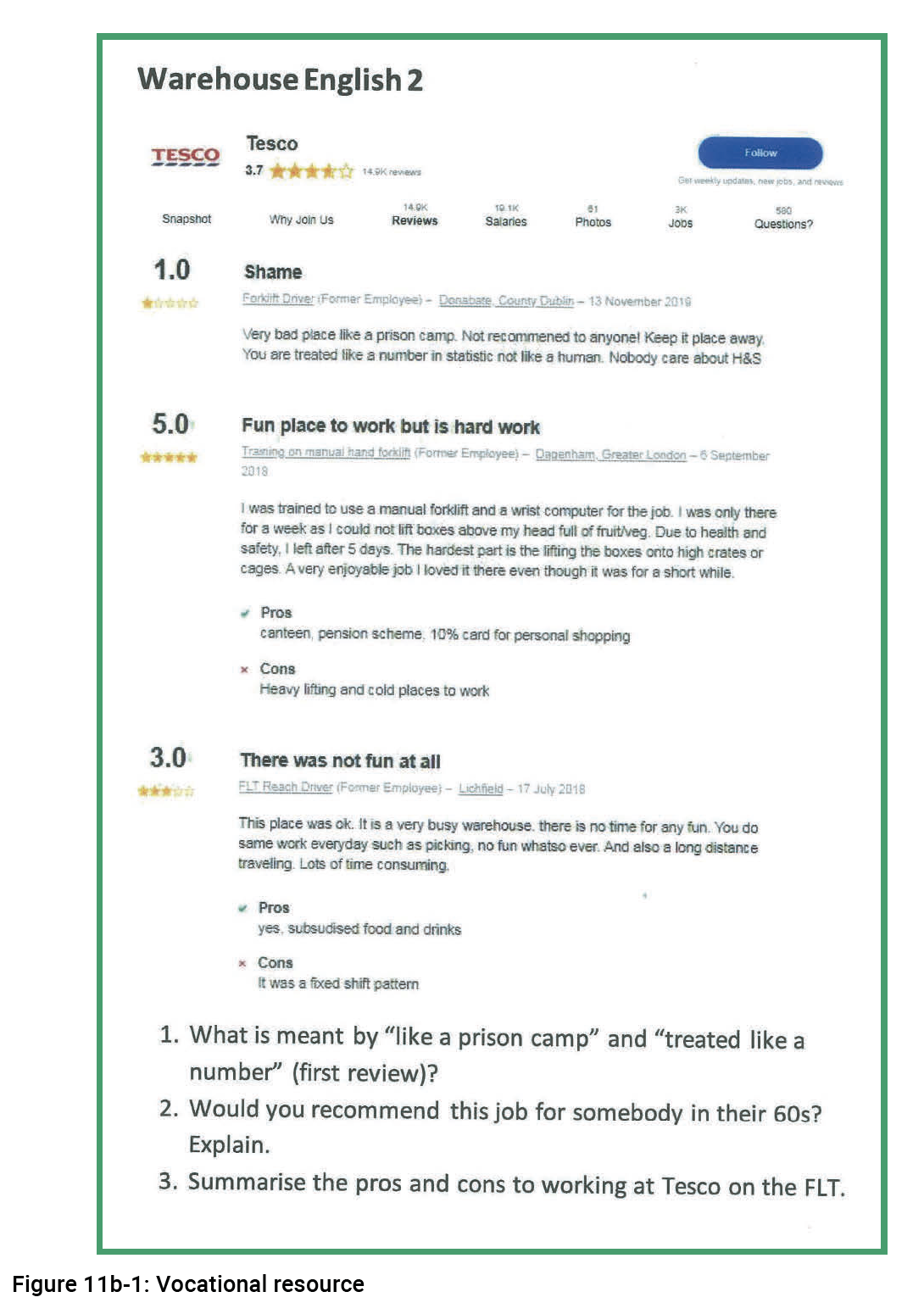 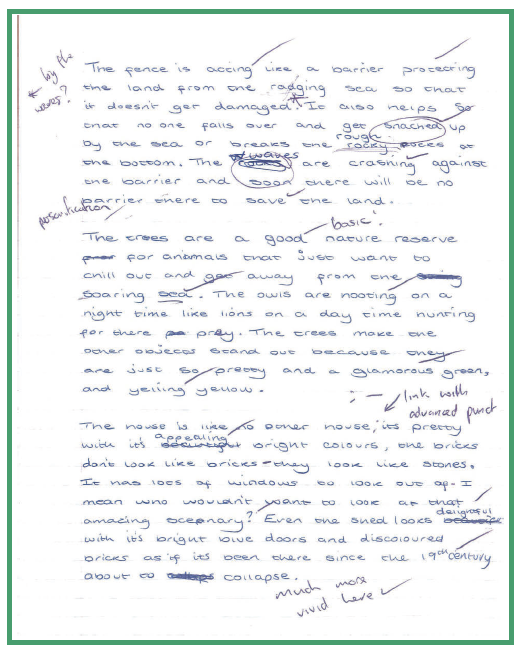 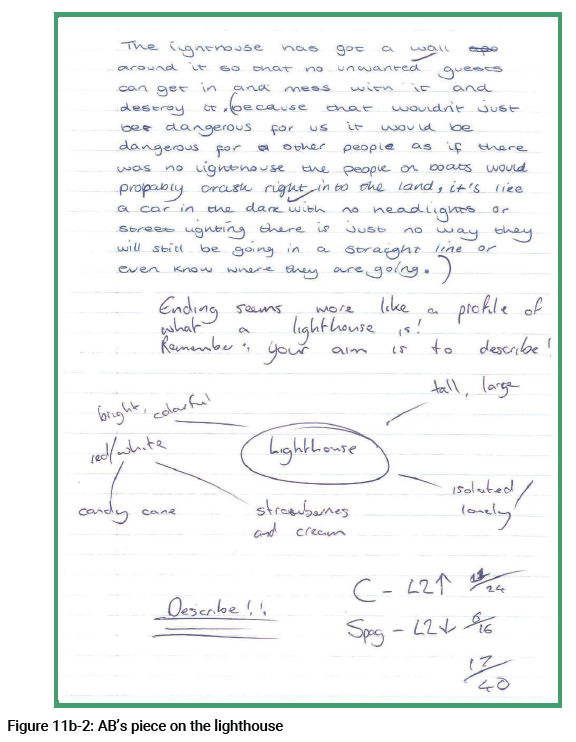 As previously stated, AB struggled to achieve grade 4 in the GCSE English exams and Jamie believed this was largely down to the writing section having seen her results. Her writing displayed a lot of potential for improvement, both in content (AO5) and technical accuracy (AO6) so this is what was focused on. Towards the exams, AB was still making avoidable mistakes in both and this was evident in her piece on the lighthouse (Figure 11b-2).

On reviewing her work, it was clear it did not meet the intended purpose of being descriptive throughout and was lacking in more advanced uses of language. These issues were more prominent in the following piece on the forest where the problems appeared to be embedding themselves in her written work. Following this, a meeting was held with AB and actions put in place. She was instructed to focus on cyclical structure, a form of structure which reverts to the topic discussed in the beginning of the text. To make this easier, it was actioned that she practices describing the weather and circling key things in images from the internet. Her subsequent text, the lighthouse revisited, is consequently far superior in terms of content and accuracy.

CD progressed into GCSE English having completed Level 1 Functional Skills English. He had always found it difficult communicating verbally because of a stammer and his confidence fluctuated throughout education. His tutor recognised that he had difficulty communicating his thoughts verbally as well as in written form. However, on coming into the GCSE classes with the greater emphasis on inquiry and discussion, CD demonstrated great confidence – perhaps due to being in with some of his friends and feeling at home in the group – in speaking out and even commented on his own performance and confidence in his verbal communication. He has produced a written report from his own point of view to corroborate this increasingly positive mindset.

The project gave tutors the chance to reflect on their strategies and make decisions that could have a positive effect in their future practice.

What went well:
• Increased motivation from learners and contribution in individual lessons
• Staff motivation increased as learner interaction improved
• Increased ownership of individual progress in lessons
• Easier for vocational tutors to find answers to maths and English queries with a designated champion to go to
• Stronger activity and engagement between tutors across teams
• Vocational tutors have a greater understanding of how to mark a variety of levels of work in regard to the English content
• Inclusion of more topical issues encouraged and improved learners’ debating skills and confidence
• Opportunities to select tasks made it easier to engage reluctant learners
• Joint marking of work between English and a vocational tutor helped the vocational tutor to raise other vocational tutors’ awareness of the English requirements

Even better if:
• Not all classes were capable of setting and working to their own aims and objectives without support. (To combat this, tutors provided learners with options.)
• It is harder to plan for classes where learners choose their own aims and objectives. The unpredictability of the outcome is always a problem in teaching and, while it can be difficult to work like this, tutors learned how to adapt through trial and error)
• Vocational tutors were more aware of the individual requirements of each level of English from Entry Level 1 to GCSE.

Learners appeared to enjoy the lessons more when they were given something topical to debate. The more controversial or thought-provoking the topic was, the more involved the majority of the learners became. However, some still chose to stay less involved, indicating that, no matter the subject, it is still largely in the hands of the individual to choose just how much they contribute. The added focus of “why” questioning combatted this fairly well when directed at those less involved.

Adult learners were particularly committed to setting and delivering on their own aims and objectives and this inspired healthy competition throughout the course. However, not all learners became more motivated by setting their own targets, with some abusing this ownership a little bit.

Vocational tutors were more able to easily find answers to questions linked to English because of the availability of the champions, and the collaborative efforts of both teams ensured they had a greater understanding of the differences in marking the work of a lower-level English learner compared to that of a higher-level learner. If more time had been available to each tutor, it would have been useful to work on an individual basis with each vocational tutor so tutors knew exactly what they should embed into their own lessons.