English in Sport or Sport in English?: Developing Reading Skills Via Embedding and Contextualising

This project was designed to improve the reading skills of Post-16 Sports students who were resitting GCSE English by creating a community of shared practice comprising English and Sports lecturers. 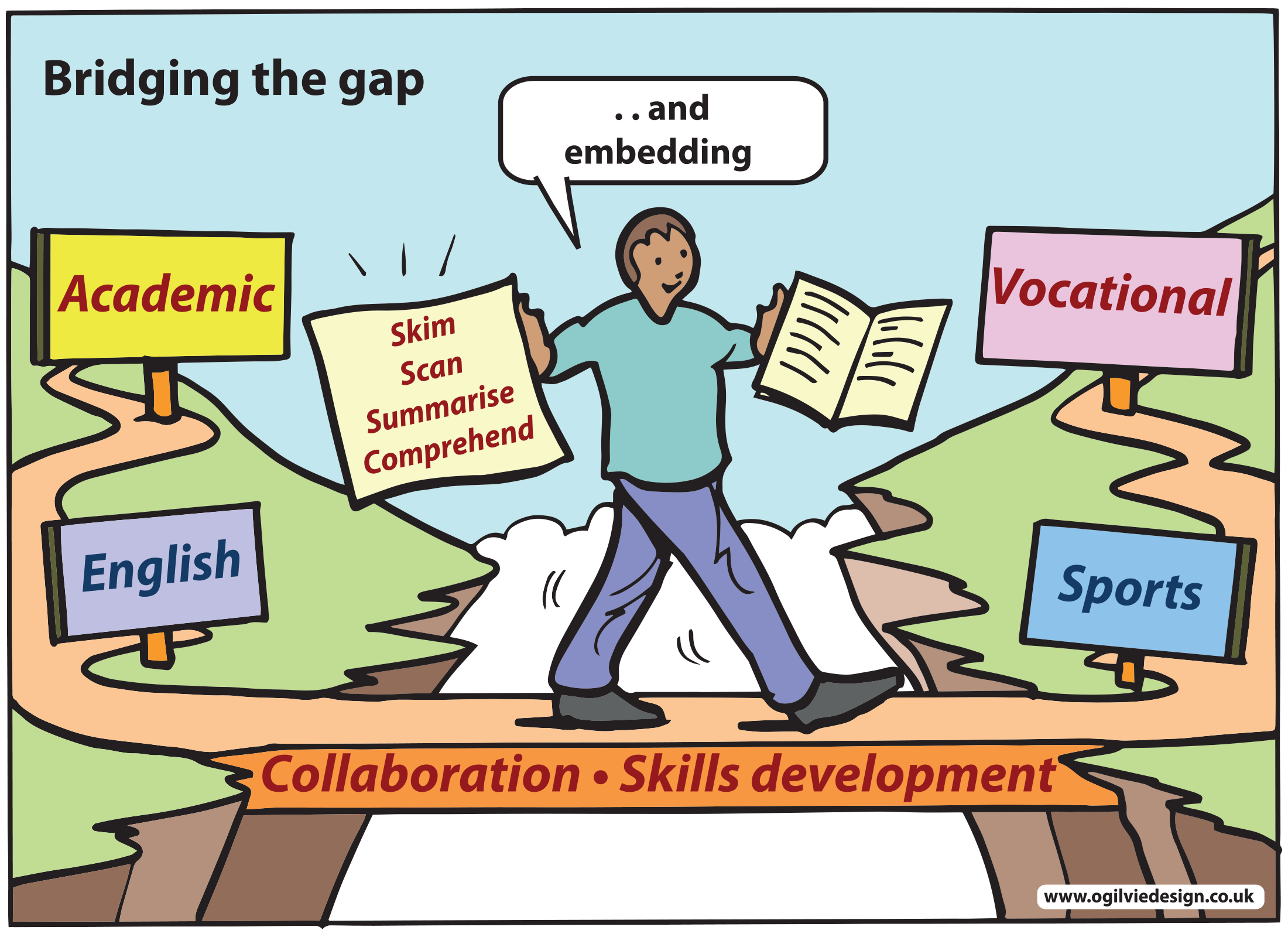 The project created a collaborative way of sharing information about individuals’ specific reading skills so that these could be targeted across their study programme. Learners engaged with vocationally relevant material in both English and Sports lessons, via contextualisation (in English) and embedding (in Sport). The main aim was to create (and evaluate) shared pedagogic DARTS approaches that English and Sports lecturers could use to help students transfer and apply skills in different contexts. A more extended aim was to investigate whether this might have a positive impact upon academic performance. In doing so, the project sought to create a strategy grounded in pedagogy that would address several challenges in the Post-16 sector (GCSE resits, the reformation of English qualifications, the EIF).

A large number of GCSE resit students struggle with the increased rigour of the reading questions in the reformed qualifications. Further, the EIF places an emphasis upon the development of learners’ literacy skills across a study programme. This project addresses the issue of how to help students to develop and apply specific transferable reading skills by examining strategies for embedding reading skills in vocational delivery and contextualising in English lessons.

Taken separately, both embedding and contextualising can lead to generalised approaches. Vocational lecturers may not know what specific reading skills a learner might need to work on. English lecturers’ attempts to contextualise can be limited by a lack of vocational expertise. This project addresses the issue of how to accurately identify an individual learner’s specific reading skills and how to share this with vocational colleagues to inform planning. Also, this project investigated how established pedagogic strategies might be shared across a programme of study to differentiate and target learners’ specific needs as well as establish collaboration.

Assistant Directors/Deans from English and Sport identified a project team who would conduct the action research (two lecturers from each area). The project was small in scale and targeted November resitters across two/three lessons. 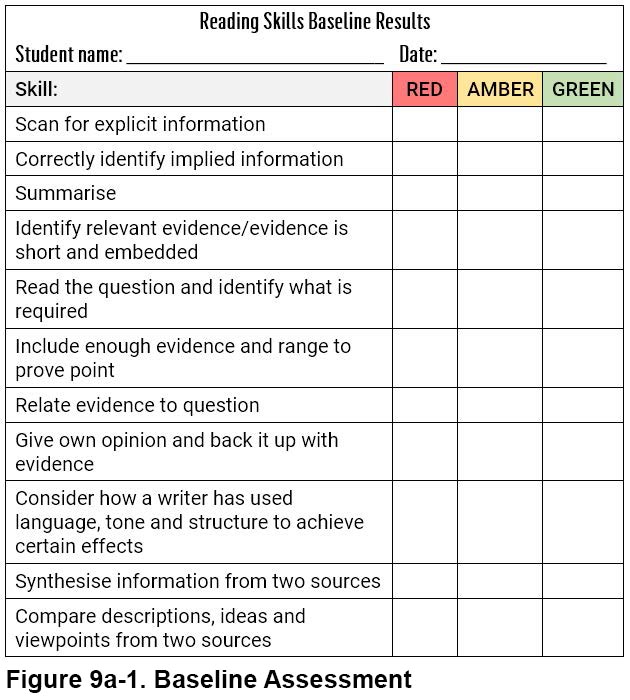 An English Skills Baseline Assessment (Figure 9a-1) was created to test students’ discrete literacy skills rather than their performance in exam questions (which test multiple skills simultaneously). The Baseline Assessment resulted in a ‘Skills Profile’ logged on Academic Tracker (accessible by English and Sports lecturers). This evaluated each skill (e.g. scanning, summarising, identifying explicit/implicit information etc.) against a RAG-rated descriptor. It indicated which areas of reading a student needed to focus on. The baseline was used to identify which learners might participate in the study.

English and Sports lecturers collaborated to plan areas for development: skim/scam, select/retrieve and summarise. In English, scanning and summary activities were used to engender these skills. In order to contextualise, we established a vocational project on ‘Doping in Sport,’ drawing on the work of WADA. English lessons (after the November resit exams) were fully contextualised to see if students could transfer the skills and apply them to this vocational context. Activities included studying profiles of different sporting figures, applying scan and summary skills.

We then worked closely with vocational colleagues to embed the same strategies in tutorials (for UCAS). This gave the students the opportunity to use the same skills, in a different context, and with their vocational tutor delivering the content.

Progress was measured in lesson via AFL strategies and examination data to assess the impact of the teaching activities used in the learning episodes.

Overall, changes in staff practice were evident in how planning for learning foregrounded the development of GCSE reading skills across the programme. The Skills Tracker allowed for the effective sharing of information about learners’ specific areas of literacy focus. Literacy skills were made explicit in the delivery of vocational material, which resulted in greater use of scanning/summarising activities. Staff and students valued the assessment of skills development across lessons.

With regard to contextualising, English lecturers valued the guidance about ‘vocational literacy’ skills that students needed in their Sports course. This provided a meaningful way of making links between practice on examination-style texts and vocationally-relevant materials. The English SOW was adapted to focus upon a Doping Project in order to keep November resitters engaged while they awaited the results of their exams.

Changes in practice were seen in the use of shared strategies to ensure a consistent approach across a programme and detailed discussions about what strategies worked with individual learners. Additionally, the change to planning increased the use of AFL to provide feedback on literacy development across a learner’s programme.

The project addressed several elements of the Professional Standards. Lecturers undertook action research as part of their reflective practice. The sharing of data and strategies encouraged staff to evaluate methods in the context of detailed information about learners’ skills. The project recognised staff as subject specialists as well as experts in teaching and learning. Collaboration was grounded in shared pedagogy, data and ownership, allowing for the ‘gap’ between subjects to be bridged.

The sharing of learners’ individual skills-data established a context in which practitioners could work collaboratively to target student needs. English and Sports lecturers formed ‘Action Learning Peer Pairs’ to plan strategies to meet these needs. Participants enjoyed this research and data-informed practice and how this was firmly linked to teaching strategies.

Lecturers reflected that these partnerships helped them to move from general ‘tokenistic’ strategies for embedding and contextualising to an evidence-based approach based upon pedagogy. They reported an increased sense of individual personal and professional growth as they felt that their contributions, skills and knowledge were recognised and valued. As a result, staff felt empowered to assume responsibility for introducing strategies within a framework of shared ownership.

The focus of activities was scanning for evidence and summarising it accurately. Despite being lower-order skills, these can be a significant barrier to obtaining a grade 4. They are important skills, tested explicitly in the GCSE exams and also underpinning all reading questions.

Starting Points: Data from June Exams
Across the two exam papers, three questions explicitly test the ability to scan, retrieve and summarise. In the June 2019 exams, Student A had a 45% success rate in these questions, while Student B had a 73% success rate. They were flagged as Amber on their Academic Tracker for these skills.

Contextualisation Phase
Learners were given a series of biographies of athletes and asked to scan for specific information, highlight it and summarise it in a grid. This was then assessed using a progress assessment sheet using student-friendly versions of the Skills Tracker RAG-rated descriptors. Student A made significant progress from Amber to Green in scanning and interpreting explicit information. Student B significantly improved their scanning and summarising skills, moving into Green. It became apparent that both students did not always use a highlighter for identifying important information. This was flagged to each learner as an area of improvement.

Embedding Phase
In Sport lessons, students read an article on progression to university and scanned for specific information before summarizing it. Student A again demonstrated improved levels of skill (in the Green band). Student B retained Green performance. Both learners acted on feedback from the contextualisation phase to improve their use of a highlighter. The fact that they both implemented this in the embedding phase showed the transfer of skills across lessons. Lecturers noted a significant improvement in knowledge retention and recall.

Outcome: Data from November Exams
An analysis of the November GCSE showed the impact of the project. Student A showed a significantly improved success rate in the scan/select/summarise questions from 45% to 73% (a 28% increase). Indeed, in the second paper they scored 100% for those questions. Overall, performance had improved in both reading elements. The biggest gains were made in non-fiction. This might suggest that the use of vocationally-relevant non-fiction was effective for this learner.

Student B increased their success rate in the scan/summarise questions from 73% to 91% (an improvement of 18%), showing a clear progression in those questions on both papers (100% in the second paper). There was an improved performance in other reading questions, especially fiction texts.

Student reflection on the Project Activities
Learners’ reflections on embedding and contextualising were interesting. In regards to contextualisation in English, student A stated that this task, linked to a Sports context, would help them when attempting a purely English-based piece of work. They said they would think back on this activity when doing English. They enjoyed the link being made between a sports topic and English skills. When asked about how they felt about the contextualisation phase of the project student B said: “I’m not interested in the idea of vocational relevance – I just want to be taught well and taught the skills that are explicit to English in an English context only.” Both students said that they might have enjoyed the first phase more had they been asked what sporting topic they would like to cover.

Both student A and B said that they enjoyed the ‘embedded’ lesson with their vocational lecturer, and felt that it had much a stronger resonance with them. They were more motivated because the work was linked to an assignment and they could see its relevance. Despite one being more enthusiastic than the other, the perception of both was that the project has, on the whole, improved their confidence and their skills. They saw a marked improvement in the quality of the work they produced and this was reflected in the exam data.

• The sharing of skills-based data was felt to be pivotal in driving collaborative change.
• Lecturers reported an increased awareness of individual literacy needs.
• Staff felt that skill-based data was central to discussing concepts of embedding and contextualising.
• Lecturers reported an increased sense of responsibility for designing tasks to promote those skills.
• Across the two teams, there was a sense of increased capacity to meet learners’ individual needs.
• There was a sense of ‘closing the gap’ through taking shared ownership of learners’ skills development and a feeling of involvement in each other’s courses.
• Lecturers felt empowered to embed literacy because of clear links made between the skills, terminology and specific pedagogic strategies.
• Adopting a ‘skills focus’ rather than an Assessment Objective focus helped lecturers in planning for the development of skills.
• The ‘skills focus’ made it clear that scanning and summarising are key underpinning skills that need to be tackled explicitly using active reading strategies.
• For learners, the explicit use of terms such as ‘scan’ and ‘summarise’ and the identification of these things as ‘skills’ helped them to make links between different aspects of their provision.
• Combining RAG-rated skills descriptors and RAG-rated AFL progress assessment sheets helped students to see their progress in the acquisition/application of skills.
• For learners, undertaking activities based around skills in different lessons resulted in improved performance in class and in exams.
• Learners valued the consistent pedagogic approach and the tracking of skills development more than the concepts of ‘embedding’ or ‘contextualising’.
• In the limited scope of this project, it seems that learners found the ‘embedding’ of literacy skills more valuable than ‘contextualisation’.
• The perception of learners was that the project had improved their confidence, their retention of the skills, and that they saw a marked improvement in the quality of the work they produced.
• The project provides a model for introducing change and for creating a community of shared practice.
• The project team felt that this project provided a model for wider institutional approaches.