The ESOL teachers at Sandwell College shared a common concern about wanting to improve learner spelling across the 16-18 cohort. In this project teachers experimented with and evaluated a range of spelling strategies. 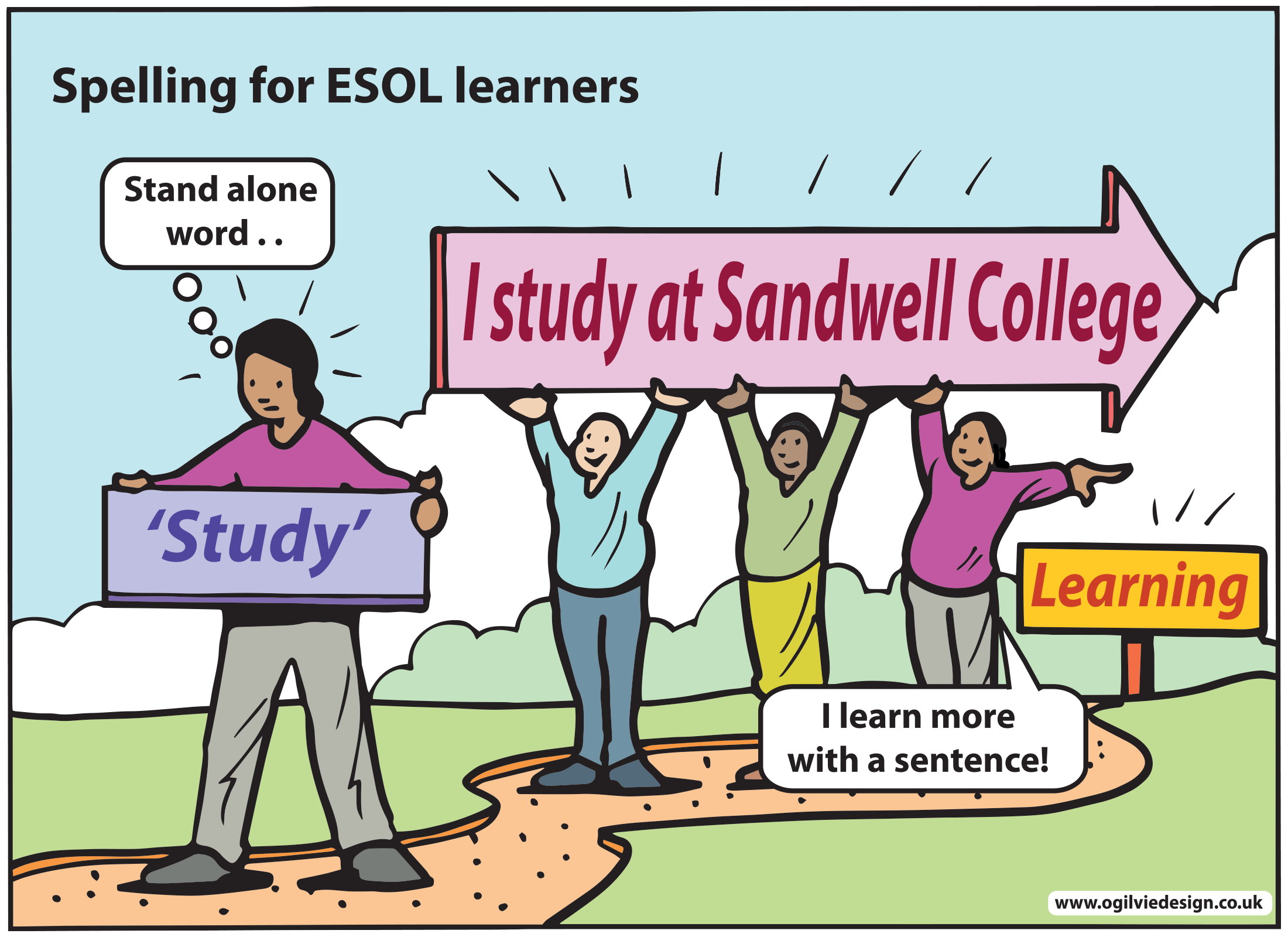 You can download a PDF of this report on the Excellence Gateway [LINK TBC].

Three ESOL teachers implemented the use of a chosen spelling strategy with one of their teaching groups, to support the improvement of learners’ spellings, word recognition and writing skills. Each lecturer chose their own approach and implemented their chosen strategy over a 9-week period. The teachers evaluated their strategy on a weekly basis to identify learner engagement, impact on progression, and progress made.

In-house achievement data for ESOL Entry Level writing is high at 96%; however, ESOL learners frequently ask for spelling to be included in their individual learning targets. Students also frequently comment on spelling as an area they want to develop further. The majority of 16-18 ESOL learners at the college come from Iran, Iraq, Gambia, Eritrea and Albania, where most are not able to access an education which includes English, or have the opportunity to use a strategy to develop and improve their spelling, word recognition and writing skills. This action research project enabled the teachers to develop the use of a strategy to develop spellings, promote progression and to firmly embed the use of the strategy into their practice.

The project participants implemented their spelling strategy from the week commencing 23 September to Friday 06 December. The approach each teacher used was:

Teacher 1 – Word cards used with a pre-entry group (Step Up) who are working towards their Entry Level 1 exams. The ‘look, cover, write, check’ method was used to practise spellings. This teacher targeted regularly used common words appropriate for pre-entry learners. The teacher provided learners with sentences to help create a narrative, rather than a standalone word that had no meaning for them. For example: ‘I live in Birmingham’. The word ‘live’ alone does not really have any meaning to the learners. However, in a sentence it helps learners to see its importance. This approach from week 3 changed to using a word board which consisted of sentences instead of the word cards. Learners were provided with different sized cover cards to support them in using the strategy.

Teacher 2 – This teacher wanted a pre-entry group to learn the spellings of the 12 months. Learners were tasked to rearrange letters to spell out the months. The teacher introduced a spelling bee competition where learners individually verbally spelled the months. A spelling test was introduced and learners gave feedback using thumbs up and thumbs down cards later on in the project. In the last few weeks of the project the teacher turned the focus to learners correctly writing and spelling their address using the same strategy.

Teacher 3 – Here the teacher gave Entry Level 1 learners 15 topic-based spellings per week. Learners used the ‘look, say, cover, write, check’ method to practise. The teacher introduced an outcome star to record learners’ confidence and actual spelling test score. Learners worked in groups to test each other on their spellings before having a spelling test

The approaches used in classroom sessions enabled learners to actively participate in learning their spellings and demonstrate their learning and progression: this was evident in learning walks. Teachers reflected on their practice and further developed and tweaked their spelling approach, enabling staff to focus their reflections on a specific aspect of their teaching, making it more relevant to their own personal development.

Teachers designated one classroom session (1 hour and 15 minutes) per week to enable learners to use their spelling approach to develop their spelling skills. This one session per week promoted a routine for learners who knew which was their spelling-focused day and came to lessons prepared for this. In these lessons, teachers commented on how learners engaged with their spellings and took ownership of their learning from when they arrived in class, where normally they would await instruction from the teacher for details of the starter activity.

All the participating teachers found that even though time constraints were involved, being part of the action research project was extremely beneficial. It allowed them the opportunity to use evidence-based practice to trial TLA strategies in the classroom to accelerate the progress learners made. Most teachers said the project has re-ignited their passion and given them the confidence to take risks and try something different and new.

The ESOL department has supported the project and the teachers involved have said they will continue with the productive work carried out to date with the aim of involving the newer members of the team in the coming academic year. They will consider carrying out action research to develop other aspects of learners’ English skills.

All staff reported more effective relationships and collaboration. The completion of peer observations enabled staff to have more professional dialogue about teaching, learning and assessment practices.

A training session in January focused on post-16 phonics for second language learners, which provided staff with phonics-based approaches to support the development of learners’ spelling, writing skills and progression.

Two teachers from the project presented their findings at the teach meet held at the college, #TMSandwell. Following the presentation there was interest from internal and external English practitioners at the OTLA Project stand. Internal staff were asking for more information regarding the project and the use of the word board. Other ESOL and Functional Skills practitioners were keen to implement the same, or a similar approach.

Most learners have been actively engaged and focused with learning their spellings and welcome the designated lesson time to practise them. A learner said:

Learners who used the word board, where a sentence was practised rather than a standalone word, made the most progress. With this approach, learners had autonomy over the words in the sentence they needed to practise to enable them to write the full sentence correctly. These learners can now form personal sentences with more ease and proficiency. By the end of the project, learners had significantly better writing skills in December, compared to learners’ writing skills from the previous academic year.

As the word board approach resulted in learners having to learn and write a full sentence, this enabled the teacher to quickly identify learners who potentially had learning difficulties. Learning difficulties are usually not assessed at the pre-entry level; however, the teacher was able to direct the LSA accordingly to provide more focused in-class support.

All learners who participated in the project have improved their handwriting, letter formation, pronunciation of words and the recall of letters and words. The word board group has seen the greatest results in the overall improvement of writing and spelling skills. Where the spelling bee was used, learners can more confidently recognise the letters G/J and I/E.

Learner confidence has increased and learners enjoyed the challenge of the project. The teachers involved at the start thought learners wouldn’t enjoy practising their spellings as much as they did. The Project Lead got a round of applause from one of the groups involved as a thank you for letting them participate.

Beginning the project at the start of the academic year has improved learner collaboration and peer support more quickly and positive learner relationships have been observed by teachers and the lead.

A number of learners involved in the project are looked after children and have Personal Education Plans. At review meetings learners have been talking about learning spellings and how they enjoy doing it. They can see the impact this has had on their writing skills and have mentioned this in their review meeting with the ESOL Head of Section and their social worker.

The teachers working with pre-entry learners have seen the impact of developing the spellings and writing skills of learners and the progress learners have made with their writing. The focus in term 1 is generally on speaking and listening skills to prepare learners for their exam. However, moving forward, staff will incorporate more reading and writing activities to develop these skills more effectively from the start of the academic year.

Prior experiences of learning and assessing spellings would be via homework tasks and spelling tests; the approaches adopted in the project have enabled learners to be more active and responsible for their learning and progress.

The word board, consisting of sentences and varying sizes of cover cards, has been highly effective in enabling learners to learn spellings and improve the sentence structure and writing of learners. Learners can see and learn how the words are applied in a sentence, and this increases their spoken and written vocabulary.

Where some learners made progress with spelling and verbally spelling the months of the year, the majority of the months were too complex for pre-entry learners. This was similar to the group who on a weekly basis were given topic-based words to learn. There is less commonality compared to the learners’ address and the words used in the word boards, which impacted the learners’ overall progress and learning.

Generally, ESOL learners are given standalone words from topics, which are not effectively reinforced or recalled when the next topic is introduced. Level-appropriate sentences using the target vocabulary give learners a narrative and a purpose for the word, thus improving learners’ understanding, recognition and commitment to long-term memory. The word board learners can independently transfer their personal details to the learnt sentences, which further reinforces their learning and confidence in writing.
The word board approach has reinforced the importance of repetition in language learning, especially at the lower levels. Because of time constraints, exam preparation and a need to achieve, or maintain high achievement rates, this is often overlooked or not effectively reinforced.

The learners involved in the project have enjoyed and fully engaged in the project. The learners had thought the only way to learn spellings was to write the word over and over again. We have seen how learners at the pre-entry level who can’t spell their name or write the alphabet embrace the project and make progress from their starting point. Staff have seen increased learner engagement and motivation.

Management need to ensure that the benefits of using word boards with pre-entry and Entry Level 1 learners are fully embedded into the department’s practice to promote the development of learners’ writing skills and progression to the next stage of study.

The pre-entry teachers learned that even though they have high expectations of their learners, the learners themselves are capable of so much more. With the positive approach, execution and assessment of their approach most learners have made high levels of progress compared to their initial starting points.

Following the success of the word board, the two teachers who used the spelling bee method will incorporate this into their teaching, learning and assessment practices to support the development of learners’ skills in preparing for their exams and their next steps.