To P.E.E. or not to P.E.E.: using scaffolding to develop written responses

This project sought to answer the question: how can staff best support learners in structuring their responses to meet the requirements of a set task? 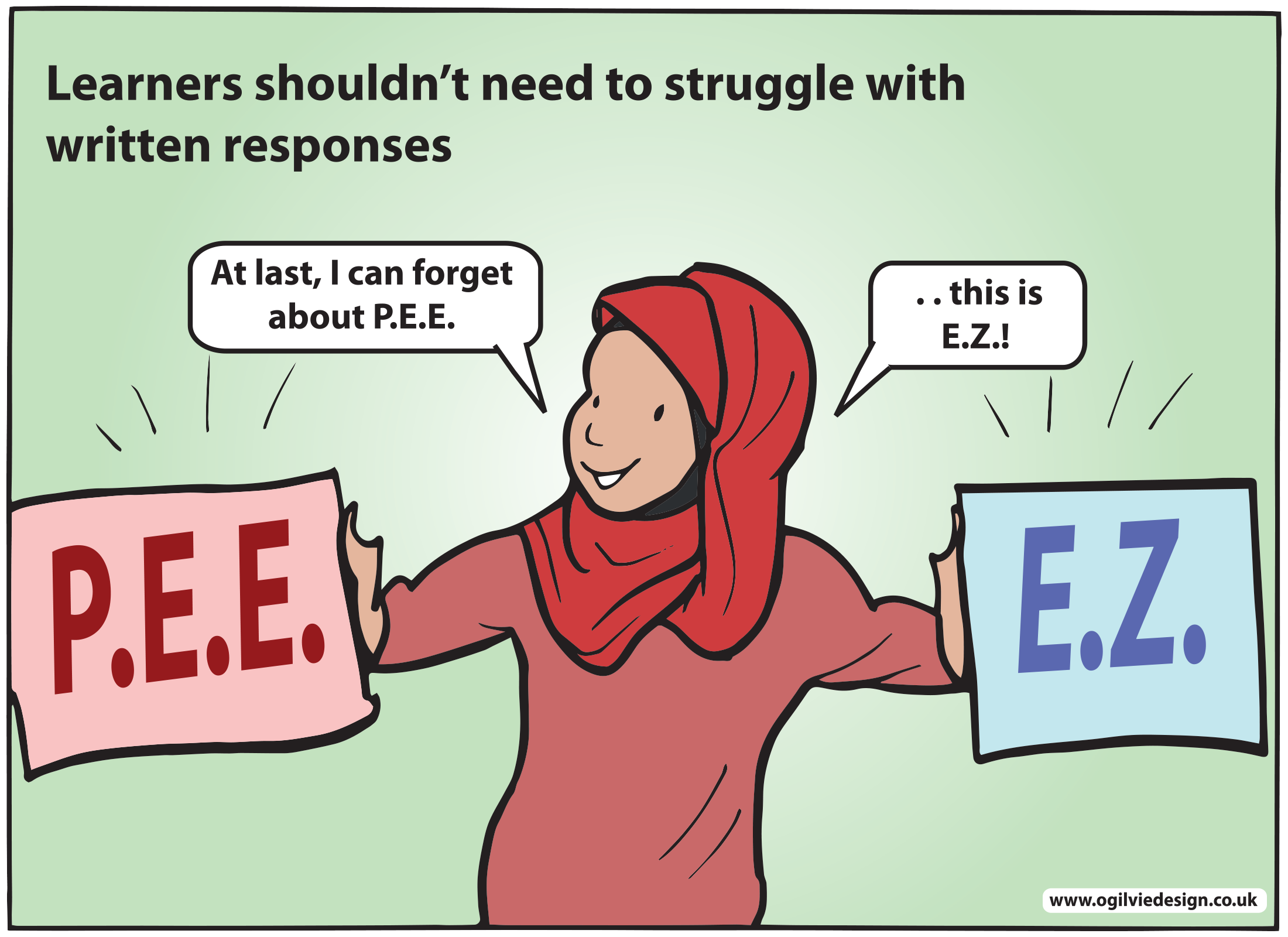 We set out to examine the usefulness of scaffolds such as ‘evidence and zoom’ (presented as paper resources) in supporting learners to respond to questions where there are very clear success criteria, as in, for example, a GCSE language analysis question. A range of such resources were offered to learners in GCSE English resit lessons. Similar resources were also offered to learners in theory lessons for level 3 courses in Animal Management and Sports Studies and the project involved tutors, learning support assistants and students from these subject areas. Moulton College is a specialist land-based FE college in the East Midlands offering programmes including animal management, equine studies, construction, sport and agriculture.

Our GCSE English learners experience many of the same challenges as other learners resitting the qualification nationally. Examples of these challenges include: their evidence not supporting the point they are making; implausible inferences being drawn from the evidence; moving from one point to another with little evidence given in support of the points; digressing from the question that is being asked and identifying language techniques but not commenting on their effects. Tutors identified a distinct mismatch between learners’ spoken and written performance. Tutors in the Animal Management and Sport departments also reported similar findings. In particular, learners often digressed from the question being asked or they missed important discussion opportunities that the question required them to mention. Vocational tutors wanted to examine the role of scaffolds in supporting learners to overcome these challenges. The English project lead had attended training about cognitive learning theories and was starting to see implications for the way tutors support learners to structure their writing.

Tutors report that this project has given them a renewed sense of the importance of reflective, responsive teaching practices. The project findings have some important implications for teaching. The English tutors involved now feel inspired to conduct further research into the usefulness of different approaches for other genres, such as persuasive writing.

Tutors in the Animal Management and Sport departments reported that they would like to apply the findings to other tasks within the courses they teach. The English tutors reported that they feel more confident in their knowledge of how best to support learners. Inspired by this project, the project lead has plans to carry out further action research in other areas.

This project has highlighted how beneficial collaboration between English teachers, vocational lecturers and learning support staff can be. Working together, all staff involved in the project felt they were able to support learners far more effectively. Future CPD is already being arranged so that staff can discuss further challenges they see their learners having, and share ideas for how to provide support to overcome these. The project lead has refreshed enthusiasm and has joined Twitter to keep current with educational research, while seeing huge advantages to sharing ideas with staff in other institutions. The college has recently facilitated CPD encouraging staff to ‘bring and brag’, recognising the importance of practitioners’ findings in the classroom and the value it can bring to others. Teaching staff from all subject areas attended this CPD and many say they learned something, which has improved their practice, from a colleague in another area.

There was evidence that many learners made progress and there appeared to be a clear correlation between learners using elements of the more formulaic scaffolds and their speed of progress. In GCSE English, the single element of the scaffolds that appeared to have the greatest positive impact on the learners’ progress was the ‘zoom’. When learners were using the ‘zoom’ element of the scaffold and focusing on individual words or phrases, tutors observed points and inferences being linked more consistently, fewer implausible inferences being drawn from the evidence and less digression from the question.

Some pieces of learner work demonstrated these findings. The majority of learners in GCSE English appeared to be using a scaffold of some sort, but it was usually not one that had been taught at Moulton College, rather a scaffold that had been learned or, more commonly, mis-learned at school or in their previous setting.

The use of a ‘point, evidence, explain’ scaffold (often referred to by teachers as P.E.E.) was evident in some of the learners’ writing, but was rarely effective. Other scaffolds did sometimes appear to be supporting the learners to answer the questions well, but in many cases, if the learners were not focusing on individual words or phrases, they were less successful.

Learners took to using a new scaffold far more quickly in vocational subjects than in GCSE English. When asked, learners suggested this was because they were already used to using a different scaffold/ formula for GCSE English (taught in their previous setting) and, therefore, the new scaffold would be replacing something they were already used to. In vocational subjects, however, it was new learning and therefore not replacing any learned behaviours.

This is further supported by the finding that learners in GCSE English lessons needed a scaffold to be positively promoted, rather than simply offered, if they were to adopt it. In exam conditions, many learners reverted to using a scaffold they had been taught previously, in a former setting, rather than the new one. Learners who were most receptive to the new tools were learners who had not previously been taught to use a writing scaffold and this was, therefore, a new concept.

Encouraging learners to explore the effect of certain words or phrases through the use of a ‘zoom’ component in a scaffold can be particularly helpful to learners resitting GCSE English language. This often helps learners to analyse more effectively, stay focused on the requirements of the question and draw more plausible inferences from direct quotations.

Encouraging learners to begin analytical paragraphs with a direct quotation from the text, rather than by making a point first, can be very useful for learners resitting GCSE English language. Learners often report that they find responding to analysis questions easier and more enjoyable when they use this approach. 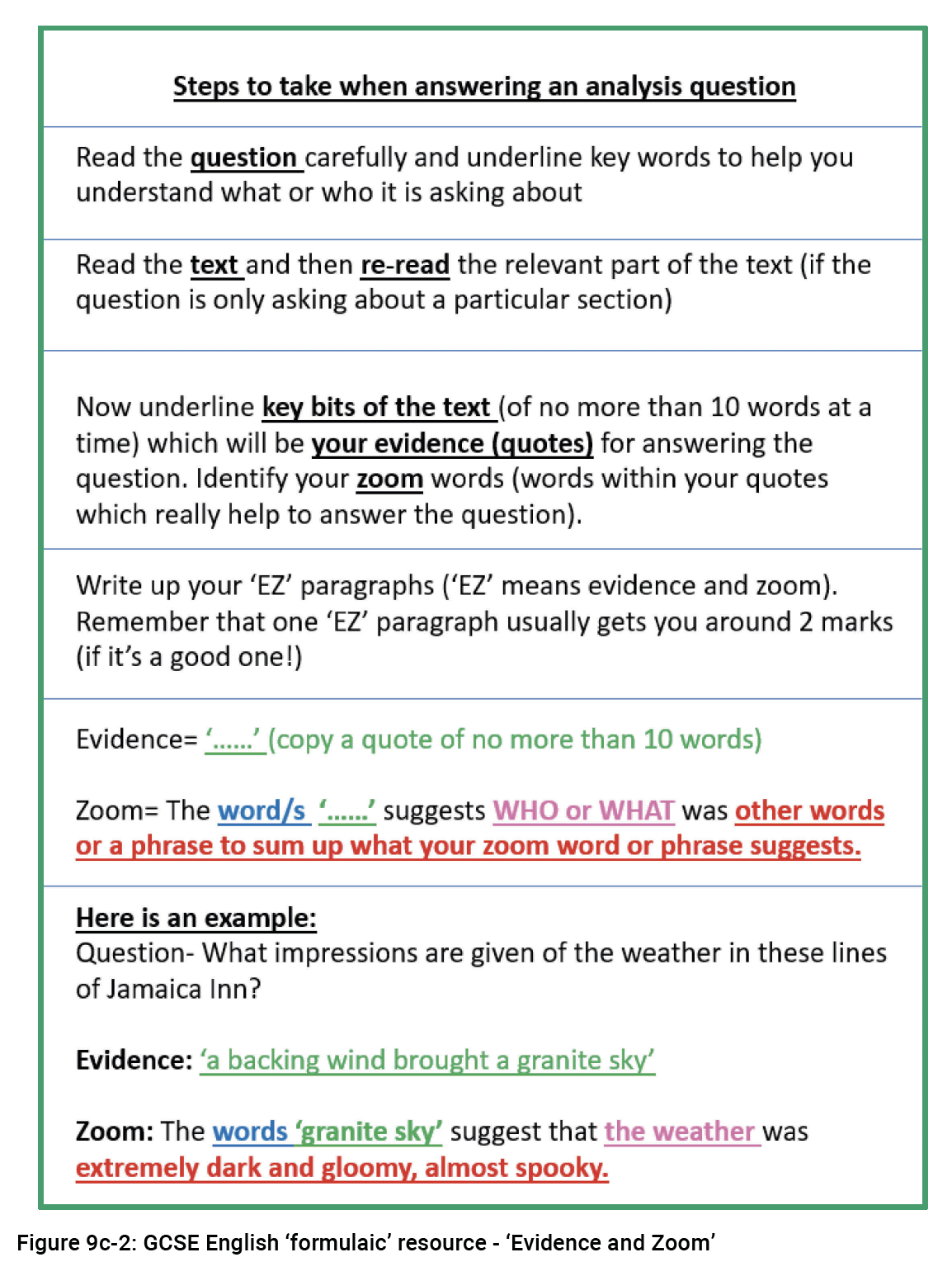 Tutors have also seen better progress from many learners when using this approach. In other words, evidence and zoom (or E.Z., see Figure 9c-2) which simply encourages students to find a direct quotation from the text and then comment on the effect of an individual key word from within the same quotation seems more beneficial than P.E.E.
Writing scaffolds are most useful when they are designed in response to the needs of the learners. Many patterns of individual differences have been observed.

Patterns could be observed in the work of learners who achieved a lower grade in their GCSE maths than in English. Many digressed from the question regularly and made points that could not be supported with evidence, rather they seemed to be drawing on their own life experience.

These learners often said they preferred not to use writing scaffolds when they were given the option and when the scaffold was simply presented to them. They appeared to struggle more with understanding formulaic scaffolds. However, if elements of a scaffold were offered to these learners as a verbal explanation, rather than simply as a paper resource, much faster progress was observed.

For example, learners who regularly began their analytical paragraphs with a direct quotation, and adopted the use of the ‘zoom’ feature, could often be seen to improve quite rapidly.

On the other hand, learners who achieved the same grade in their GCSE maths and English (grade 3 in both subjects) responded much more positively to the formulaic scaffolds and usually understood it straight away. Improvements could be seen in their writing as a result.

Finally, learners who were more confident in analysis often found a formulaic scaffold to be restrictive and preferred to write more freely, usually with success. Some of these learners said they were using elements of a pre-learned scaffold, but it was more detailed and they felt confident enough to write in a freer and more flexible way. Many stated, when interviewed, that they preferred the ‘tips and guidance’ type of resource and found it useful.

Many learners find a scaffold useful to support them in responding to questions where there are very clear success criteria. This is also the case in vocational subjects. In vocational subjects, more prescriptive scaffolds are favoured by learners who achieved a grade 3 or below in GCSE English language.

Excellent progress can be seen when a carefully tailored scaffold is designed and learners are actively encouraged and shown how to use it. As learners become more confident writing about the subject, the need for a prescriptive scaffold reduces.
Vocational tutors were more engaged with this project than with previous English CPD, because the scaffolds responded to a need within their own subjects. They could see the benefit to their learners and so English development became a natural and meaningful part of their lessons, not a forced additional (tick box) activity that they struggled to integrate. This gave vocational tutors a clear method for supporting learners with their writing in a structured and effective way, especially when English wasn’t necessarily their own strongest subject. They now report feeling more confident in embedding and developing English.

Appendix 1 – Resources that were offered to learners