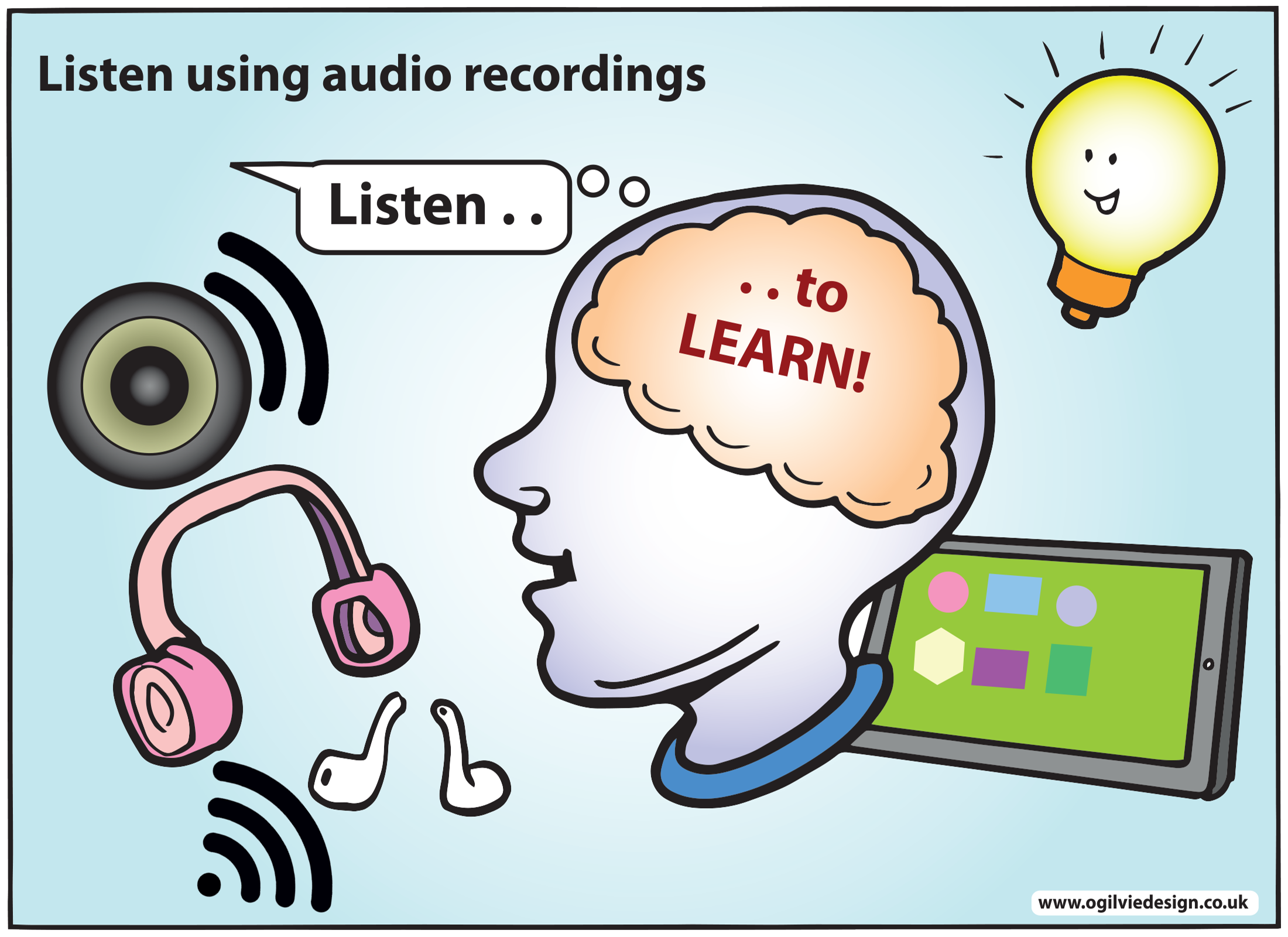 how New College Stamford aimed to introduce a different dimension to the teaching and learning of GCSE English resits by producing and using audio recordings of written texts as a resource to engage learners and develop their reading and interpretation skills.

The development of audio recordings as a teaching and learning tool has emerged as a successful development although we feel that we still need further time for this approach to be fully embraced by our students.
Our project team consisted of the Head of Department and two English lecturers who between them developed the new resources and implemented the development plan. We worked with 2 classes of students from a mixed vocational background who had achieved a GCSE English grade 3 and were currently resitting their GCSE.

The aim of the project was to use audio versions of GCSE texts to engage learners’ interest and then use them in different ways to support the development of learners’ comprehension and interpretation skills when tackling the written versions.

The students would have access to recordings of the texts with a focus first on using their listening skills to understand and interpret the content. As their confidence grew through familiarity with audio versions of the texts, we would then focus more fully on reading and interpreting the written versions.

We also hoped that the project activities would generally improve students’ reading skills and thereby enhance their interpretation of articles, reports, scenes and speeches in other curriculum areas.

In our original project proposal, we planned to develop a set of recordings of the texts used by lecturers in GCSE English lessons and make them available to a chosen set of students to act as a pilot study.

The plan was for recordings to be produced in-house by students to encourage their engagement, and for these resources to be shared prior to, during and after lessons via Google Sites to encourage independent learning.

The project was designed to generate qualitative data by means of semi-structured interviews with staff and students, and quantitative data through the review of attendance data, the impact on achievement and the level of access to the resources. The impact of the study would also consider the active engagement of our students and their involvement in recording the texts to be used in class in the autumn term. The research process was facilitated by the project leader while our Head of Department for English & Maths and English lecturers formed the project working team and led on the implementation plan.

The project was split into 2 parts:
The first part of our study was planned to begin before autumn half term and focused on the introduction of a chosen English text into a GCSE English resit lesson through small group discussions centred around the techniques used by the writer. Our students were asked to consider what the text would sound like if it were being acted out on the radio, or if it were an audio recording. They were then encouraged to consider how the writer had written the scene. This was followed by an opportunity for students to produce a recording of how they felt the piece should be read out and how a ‘listening’ audience might respond.

As part of the activity students were asked to share their views and to consider:
• How useful did they think it would be if they could listen to the piece as well as read the text?
• Did they find the activity useful in helping them to interpret the text and identify the writer’s techniques?
• Did they feel more confident having carried out the group activity? And so on …

The second part of the study introduced a new piece of text with students first listening to an audio recording of the chosen text. The lesson then carried on as per usual. The purpose was to discover whether listening to the text first might aid our students to become more engaged with the material and responsive to learning about the writing techniques used by the writer.

Again, as part of this activity our students were asked to share their views and to consider:
• How helpful did they think it was to listen to the new piece of text before reading it?
• Did listening beforehand make the piece of text more accessible?
• Was the activity useful in helping the students to interpret the text and identify the writer’s techniques?
• Is this something the students would readily do again?

We also planned to post the recording to a Google site so that students could access the recording outside the classroom. This would give them opportunity to listen to the text before they came to class, and again in class before reading and engaging with the questions set around the text.

Our aim was to introduce an element of team building in the classroom with students working in small groups and attempting to record their own interpretation of one of the English texts introduced in their GCSE lesson. However, it soon became obvious that it was too early to introduce such an exercise as our students gave a mixed response to it and struggled to fully comprehend what was expected of them. Consequently, we reconsidered our plans and introduced an element of flipped learning to the lessons instead. This allowed our students to access the audio version of the GCSE text and carry out some independent study in order to become familiar with the text. It was also an opportunity for them to trial a different learning format and become more confident and prepared for their next lesson.

Another activity that was positively introduced was for our students to access the audio recording of a GCSE text in a 15-minute starter activity prior to a mock assessment. This approach has proved to support our students in developing the confidence to engage with the materials, giving them another learning strategy to help their progress and development in the autumn term. It was seen as a successful student engagement tool to help boost their confidence while developing their skills in the interpretation of texts.

Following the project, we have initiated the following:
Prior to the November assessment, we decided to play the audio recording in the first 15 minutes of the lesson to act as a stimulus and a focus for our students. From observations it was clear that this starter activity helped to engage students in directing their attention to the text.

It was also decided that our Study Centre, which offers 1-1 and small group support for English, would also become involved in taking the pilot forward into the winter term.

Additionally, the audio recordings evolved throughout the term: initially they were recorded in silence with no background noise. After feedback from our lecturers and students, another recording was produced with a natural or white noise background.

Our Head of Department observed that the recorded audio acted as a ‘class stabilizer’ as students quickly settled to the task. The activity also acted as an interesting, shared, inclusive and social event with all students paying attention and taking part in a class-wide shared exercise that generated discussion.

Interestingly, our students engaged more with audio produced with background noise for several reasons. For example, they said it was easier to imagine the scenes in their minds and from a technological point of view the audio was easier to edit.

The project has enabled us to develop a new approach to helping students understand and interpret GCSE English Language texts.

Feedback from our two lecturers involved in delivering the project highlighted the following key points:

Additionally, the approach is to be extended and used in 1-1 support sessions, again with the aim to build student confidence and act as an aid to develop and build reading and interpretation skills. Two of our GCSE English classes took part in the project. One group was a mixed class of students from across various curriculum areas and the second class was made up of Construction students. There was a mixed response from the students in regard to the introduction of the use of the audio recordings.
Student observations included:

“I don’t think listening to the words improved my understanding but it did help me focus more on what to do.”

“I could understand some complicated words when they were read out because when I read them, I did not know how to say them.”

“Reading was quite slow at times which is boring but relaxing.”

“The voice was more natural than the reading pen … it flowed better.”

What went well
Key feedback from the project which demonstrates learning includes:
• A number of our students felt it was a novel and engaging way to connect to texts
• students that were not happy reading or did not find it an enjoyable exercise felt this was an activity that included them
• less confident students felt they could access the audio for clarification instead of asking for support
• students who read slowly felt they could access the text more quickly than if they were initially reading on their own

Even better if:
• Going forward a greater adoption of the whole approach of the project within the team and the college is necessary if it is to have continued impact through the academic year.
• More planning will be required to identify texts and have them recorded and published in good time to produce an effective resource bank.
• More practice is needed in technical skills of recording the audio files to improve the sound, pace and vocal output. For example, most students preferred a musical bed or background to accompany the text, which requires more time and effort. If the resources are popular, we hope that our students would become involved in the activity themselves and therefore have a stronger sense of ownership.